As most people know, I absolutely adore Apple and the work that’s been coming out of there as it relates to the iPhone and (gasp) HTML/Javascript as a web development platform.

I went so far as to try install Safari for Windows on my Vista machine. Not really because Im a huge Safari fan; I use Firefox on my iMac. However, I read a lot about the speed increases and just had to see it for myself. The first thing that the installer wanted to do was install the Apple Software Update service. Sure, why not? If a new version of Safari comes out, it’d be nice if I would be auto notified of it’s existence.

That part seemed to install fine, however, there were some major problems trying to install Safari on Vista. I didnt really have the time to try and investigate what was causing the problem, so I pretty much just forgot about it.

Until this morning… When I logged on to my computer, I was presented with this screen: 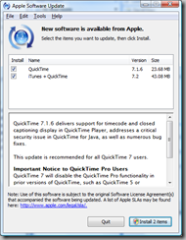 This screen really pissed me off. The reason I’m so annoyed by this screen and am calling out Apple on this is that my Vista machine has no other Apple software on it. I do not have QuickTime or iTunes on my machine, yet I’m being asked if I want to update it. This could be considered increasing your user base by deceptive methods. Shame on you, Apple.